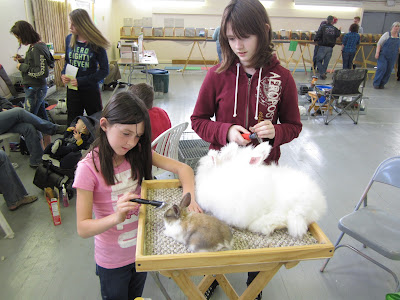 We received some news this morning that is really exciting and I am just so proud of my husband and my dad for working so hard on this rabbit food business.  I know that some people look at us weird (with reason) when we tell them what we do but in the ‘rabbit world’ it is becoming such a big deal and when we hear stuff like this it makes it all the better!  Whohoo!! Anyway onto the good news…well first back up.  Rabbits on our feed have been winning various first place awards in the Utah Idaho area and even in California I think.  And in case you didn’t know (I didn’t), rabbit shows are a big deal.  It’s like any other animal show…the owners, the judges and the lovers of said animals put a lot of time and effort and money into it.  So when they win it’s pretty exciting!  Well just this last weekend was the greatly anticipated National rabbit show held in Kansas.  A few of our loyal customers out west here took the long trip in hopes to come home winners!  Well one of them called David this morning with the good news!  He and his daughter pretty much took the cake at this national show!  No, not pretty much, they did steal the show.  He won ‘Best of Breed’ nationally and his daughters 5 rabbits took the top 5 other awards!  All 5 of them!  No one else had a chance!!  HA!!!  So he said everyone was questioning him and asking him what they feed and wanted to know what supplements they use and he proudly was able to say, ‘Nope we don’t use any supplements, we just free feed Sherwood Forest feed!’  Yay!!  One of our other sources say also that they went to lunch with a representative of this HUGE hay company that we were working with and was asking questions about us and told this guy that they were going to be in contact with us.  Yes exciting although I think we’ve decided that if this hay company does want to work with us now that we’re going to turn it down.  But it’s fun nonetheless!  We’re getting well known and getting some huge recognition in the rabbit world! Yay!  So so exciting!  It’s so fun to see all of this hard hard work really paying off!  It really does work!  It truly is the best feed in the world.  Way to go babe and way to go Dad!  Way to go Sherwood representatives in Kansas!