Posted on August 25, 2013September 25, 2013 by anna.sherwood7@gmail.com
David and I have been homebodies lately except for the occasional date night. Yesterday however we decided to break the spell and head to Ogden for a swim party with both kids.  We got them fed, dressed and loaded in the car.  Honestly after completing those tasks we were ready to relax and be couch potatoes but we persevered and drove out of town.  About half way there it started to rain.  We wondered if it was still going to happen but we soon realized that both of us had forgotten our phones!  I had a temporary freak out because I hate driving without a phone! What if something happened?! Ran out of gas, got a flat tire, you know all those things that never really happen! So I got over it…but unfortunately because we didn’t have a phone we had to drive all the way there just to find out it was canceled. Bummer.  William was by then screaming in the back of the car because he was starving so we pulled into the parking lot and I fed him while the rain flooded down and David and Ben played in the front seat with all the buttons and the horn of course!  We even let Ben ‘steer’ the car as we slowly drove around the lot.  So hey we didn’t get to go swimming at the cool pool but he got to drive!  William then decided to have 2 consecutive blow-outs, thank goodness I had packed more than one diaper.  We got buckled back into our seat belts and started to drive home, the rain now just barely a drizzle.
As we were driving up into the canyon quietly thinking that although the evening appeared to be a waste of time it actually turned out to be an OK memory.  William was again very upset in his car-seat so as I was trying to calm him down, over his wails we heard something.  It didn’t sound right.  ‘Is that us’?  After a few more seconds we knew that it was us.  Something was wrong with the car.  We pulled over immediately on the side of the busy canyon road and David jumped out.  He got back in the car seconds later…’We have a flat tire’.  You’re joking.  You must be joking because you see we don’t have a phone…the one time we don’t have a phone and we get a flat tire…hahaha very funny joke honey.  Well turns out he wasn’t joking.  Here is the proof. 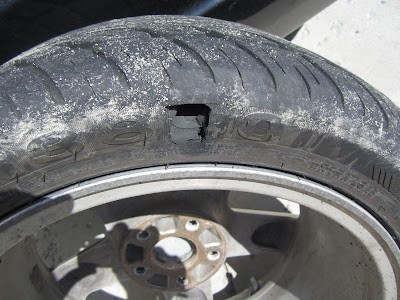 No biggie though..that’s why cars have spare tires.  And my husband is such a manly man, he knows how to change a tire with his eyes closed.  I wasn’t worried..even if we didn’t have a phone.  So he opens the trunk and pulls out the spare…flat.  HA! You’re joking right.  Because you see we don’t have a phone.  That would just be too ironic and cruel.  But no, no joke. Our spare is flat.  Now what do we do? The only thing you can do start flagging people down from off the side of the road! I wish I had taken pictures of this part.  There David was with his hand in the air like he was calling a taxi and dozens of cars are flying by.  Then he got a stroke of genius.  He came around the side of the car and unbuckled Ben from his carseat and carried him out to the side of the road with him and again started flagging cars down.  I kid you not in a matter of seconds a car stopped.  They offered us their phone and we called my parents.  Straight to voicemail.  Then we realized that tonight was going to be their date night and they had gone to a movie.  Ha! What luck!  So there we were not sure what to do and another car pulls off the highway.  He offers to take our spare tire into Brigham City and blow it up for us.  We send the first car on their way with a big thank you.  They even offered to take me and baby Will to Logan but we opted to stay together.
20 mins of waiting and the friendly second man was back with a plump spare tire.  Here is the really amazing and cool part, in that 20 mins, FOUR more cars stopped to ask if we needed help!   It was so nice I felt bad sending them away without an opportunity to help!  So in little over a half hour 6 cars stopped to see if we were ok.  How cool.  It was a pretty heartening experience.  And even though one of my fears was realized (being stranded without a phone), we made it through just fine and I was never worried.  I was reminded that we’re not living in this world alone.  We are surrounded by good people who love to help and serve and that’s the whole reason we’re here…to help and serve.  And here’s another whole 2 reasons I am here… 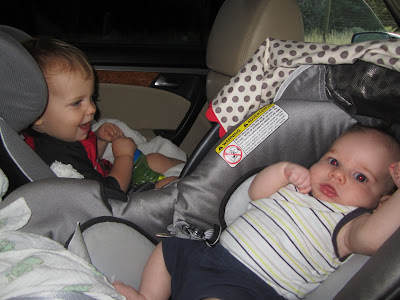 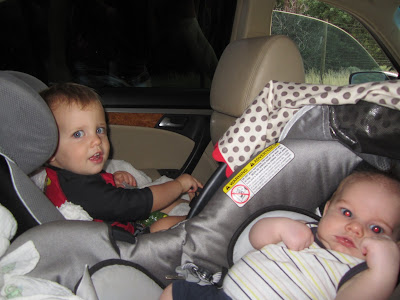 I love my family.  What a great Saturday evening don’t you think??